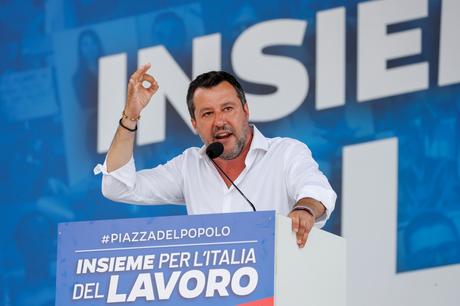 ROME Italy's far-right League leader Matteo Salvini staged rallies across Tuscany on Friday, looking to pull off a potentially stunning electoral victory against the left in the picturesque region.

ROME Italy holds seven regional elections and a constitutional referendum on Sunday and Monday, with an alliance of rightist parties looking certain to make gains at the expense of divided government partners.

STOCKHOLM Helen Balfors, a project leader at Norwegian conglomerate Orkla, has been working from home for longer than most of her colleagues after returning from a skiing trip to Italy in February as the new coronavirus took hold in Europe.

LONDON/MILAN/PARIS London Stock Exchange entered exclusive talks to sell Borsa Italiana to Euronext on Friday, with the French operator seeing off Deutsche Boerse and Switzerland's Six as it bids to add another bourse to its pan-European network.

MILAN Italy's national civil aviation authority, which has accused Ryanair of failing to comply with COVID-19 health and safety regulations, on Thursday said it has held discussions with representatives of the budget carrier.

LONDON/MILAN/FRANKFURT The London Stock Exchange will review offers valuing Borsa Italiana at up to 4 billion euros (3.64 billion pounds) at a Thursday board meeting, three sources familiar with the matter said.

MILAN Macquarie is set to submit a binding offer for all or part of the 50% stake held by utility Enel in Italian broadband network operator Open Fiber, a source familiar with the matter said on Tuesday.

MILAN Ferrari rolled out the Portofino M, a modified version of its top-selling gran tourer, on Wednesday as the Italian sportscar maker pursues a rapid turn over of new models despite the coronavirus crisis.

GENEVA Belarus opposition leader Sviatlana Tsikhanouskaya demanded on Friday an international mission to document what she called "atrocities" during crackdowns on anti-government protests, but said she was ready for talks to end weeks of violence.