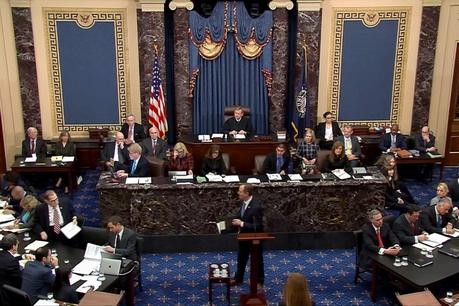 WASHINGTON On the second day of House Democrats laying out their case in the U.S. Senate for removing President Donald Trump, there was little sign on Thursday that their arguments had changed any minds among Republican senators who control the chamber. | Video

Trump 'made a religious man out of Vladimir Putin,' jokes Schiff 5:17am GMT

WASHINGTON There have been few chuckles during U.S. President Donald Trump's impeachment trial in the Senate. But a wisecrack on Thursday about Russian President Vladimir Putin produced some laughter, at least from the Democratic side of the chamber.

About 8.9 million TV viewers watched the U.S. Senate impeachment trial of President Donald Trump on Wednesday, the first day Democrats laid out their case against the president, marking a significant drop from the roughly 11 million viewers who watched on Tuesday, according to Nielsen ratings data.

A bipartisan majority of Americans want to see new witnesses testify in the impeachment trial of President Donald Trump, and the public appears to be largely following the proceedings even after a bruising congressional inquiry that lasted several months, according to Reuters/Ipsos polling released Wednesday. | Video

KIEV Ukraine's security council said on Thursday it was awaiting a decision on whether Tehran will hand over black boxes of the Ukrainian airliner it downed after an Iranian team presents its report to authorities in Tehran.

BERLIN/MILAN A German artist who is laying bronze-capped cobblestones commemorating members of families who were deported and killed by the Nazis says he can never honour all the victims of Hitler's atrocities, but he is going to press ahead anyway.

WASHINGTON President Donald Trump would have a tough time blocking John Bolton's testimony in his U.S. Senate impeachment trial by invoking the legal doctrine called executive privilege if his former national security adviser is subpoenaed as a witness, according to legal experts.

KIEV Ukraine started talks with Russia on a new swap of Ukrainians detained in Russia and in eastern Ukraine, which is under separatist control, Ukraine's presidential office said on Thursday.

WASHINGTON Democrats accused President Donald Trump at his impeachment trial on Wednesday of a corrupt scheme to pressure Ukraine to help him get re-elected and warned that America's global prestige would suffer if the U.S. Senate acquits him. | Video

WUHAN, China China stepped up measures to contain a virus which has killed 25 people and infected more than 800, with public transport suspensions in 10 cities, temples shutting, and the rapid construction of a new hospital to treat those infected. | Video