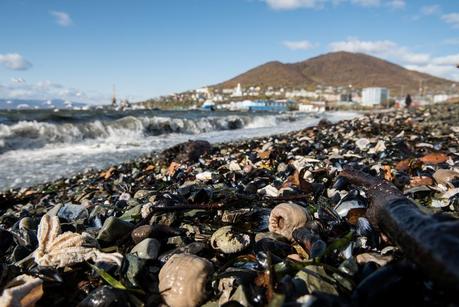 MOSCOW Russia said on Friday the mass death of marine life off the coast of its far eastern Kamchatka region had been caused by toxic algae and was not a man-made disaster, but Greenpeace said it was still too early to say for sure.

BRASILIA Alessandra Korap of the Munduruku tribe in the Amazon was awarded the 2020 Robert F. Kennedy Human Rights prize for her work defending the rights, ancestral lands and culture of indigenous people in Brazil.

MELBOURNE Australia will fast track the approvals process for one of the world's biggest wind and solar projects in Western Australia, which aims to start generating power and producing hydrogen and ammonia late this decade.

SANTIAGO A clutch of critically-endangered water frogs rescued from a muddy puddle in Chile’s driest desert has birthed 200 offspring at the country’s national zoo, the Chilean government announced on Wednesday.

BANGKOK China on Thursday signed an agreement with the Mekong River Commission (MRC) to share year-round data on the flow of its portion of the vital waterway amid concern that Chinese dams may be causing drought downstream in Southeast Asia.

RABAT Two years of drought have drained reservoirs in southern Morocco, threatening crops the region relies on and leading to nightly cuts in tap water for an area that is home to a million people.

SYDNEY Australia's Queensland state and HSBC said on Thursday they will make a "world-first investment" to protect the world-heritage listed Great Barrier Reef which is suffering from extensive coral bleaching events.

JAKARTA Japanese Prime Minister Yoshihide Suga said on Wednesday that he is aiming to make a speedy decision on the disposal of contaminated water at the tsunami-crippled Fukushima nuclear plant.

HANOI Vietnamese soldiers with heavy machinery and rescue dogs searched on Monday for the last remaining troops buried under a mudslide, after recovering 18 bodies from the latest in a week of deadly landslides caused by unrelenting rains.